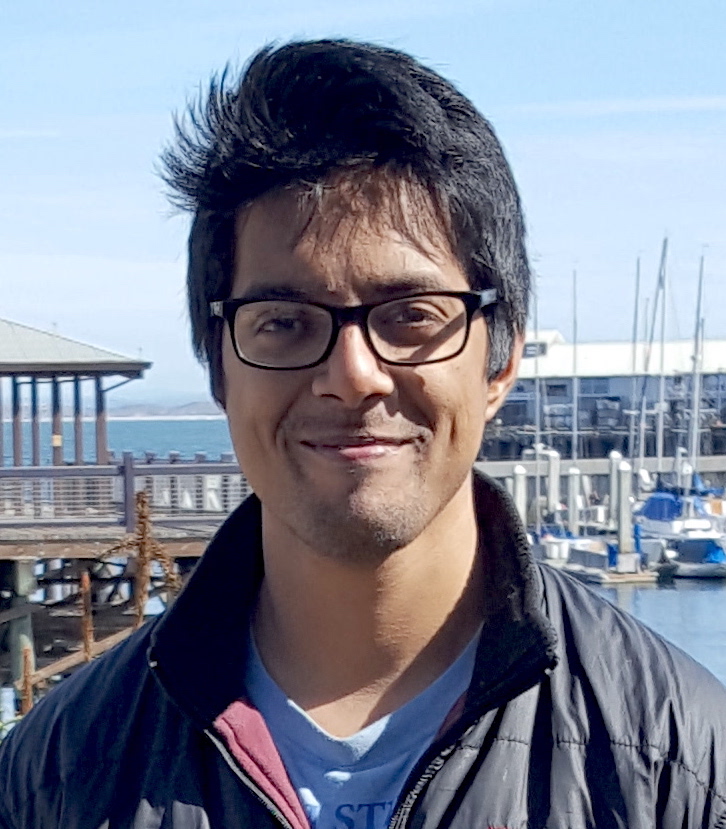 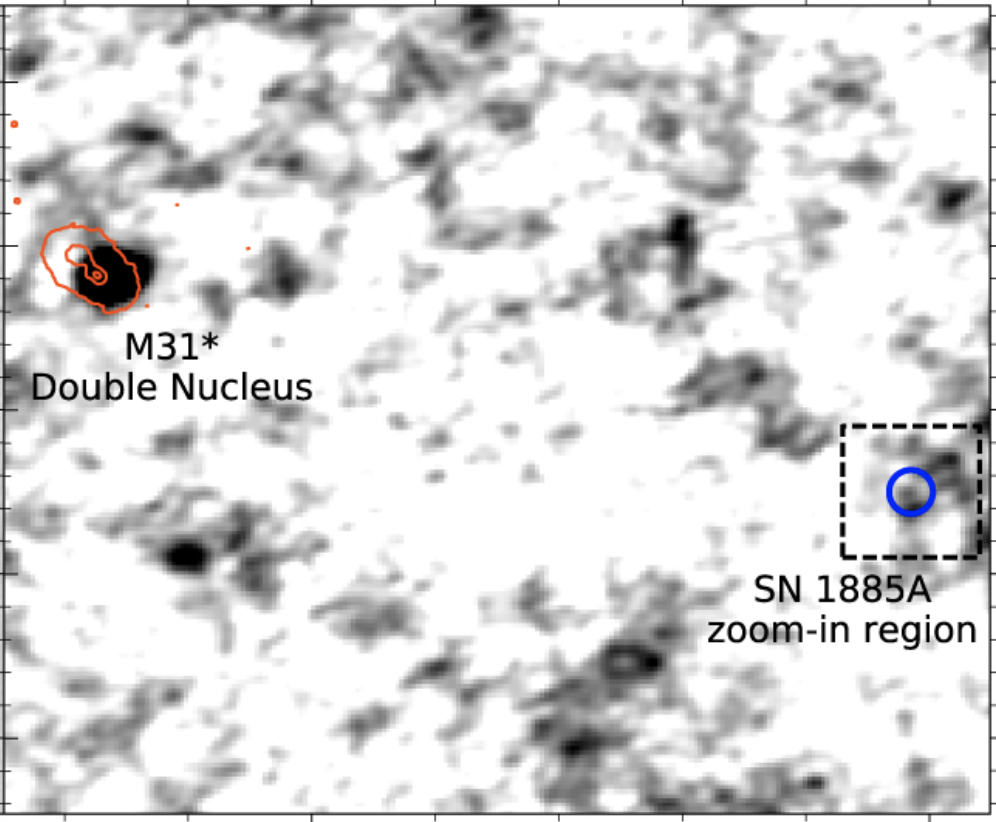 Deep VLA observations of SN 1885A in M31, an old thermonuclear supernova, from Sarbadhicary et al (2019)
Connecting supernova with their progenitor stars is a major challenge in astrophysics as we rarely get to observe the stars that explode. Many open questions exist as a result, e.g. are thermonuclear (Type Ia) supernovae explosions of white dwarfs with a main-sequence, red-giant, sub-giant, or white dwarf companion? Is the explosion driven by accretion, merger, or collision with the companion? How often do the white dwarfs explode below the Chandrasekhar limit? For core-collapse supernovae, whose progenitors are massive stars, the precise mass range of stars that explode is presently unclear as a result of uncertainties in binary stellar evolution and the stellar structure of evolved massive stars.

I have been working on this topic on two fronts: (1) Studying the circumstellar material around the progenitor with radio observations and (2) Measuring the delay-time distribution of supernovae from supernova remnant surveys. In approach (1), radio serves as a clean tracer of circumstellar material and is produced by interaction of the material with the fast-moving SN ejecta. Observing supernovae in radio from days to years after explosion can map out the distribution of material and connect with the type of progenitor that may have produced it. In (2), the delay-time is the timescale on which stars explode, and different progenitor models explode on different timescales. Measuring this range of timescales, and the efficiencies at which SNe are produced on different timescale can reveal the types of progenitors that can produce supernovae. 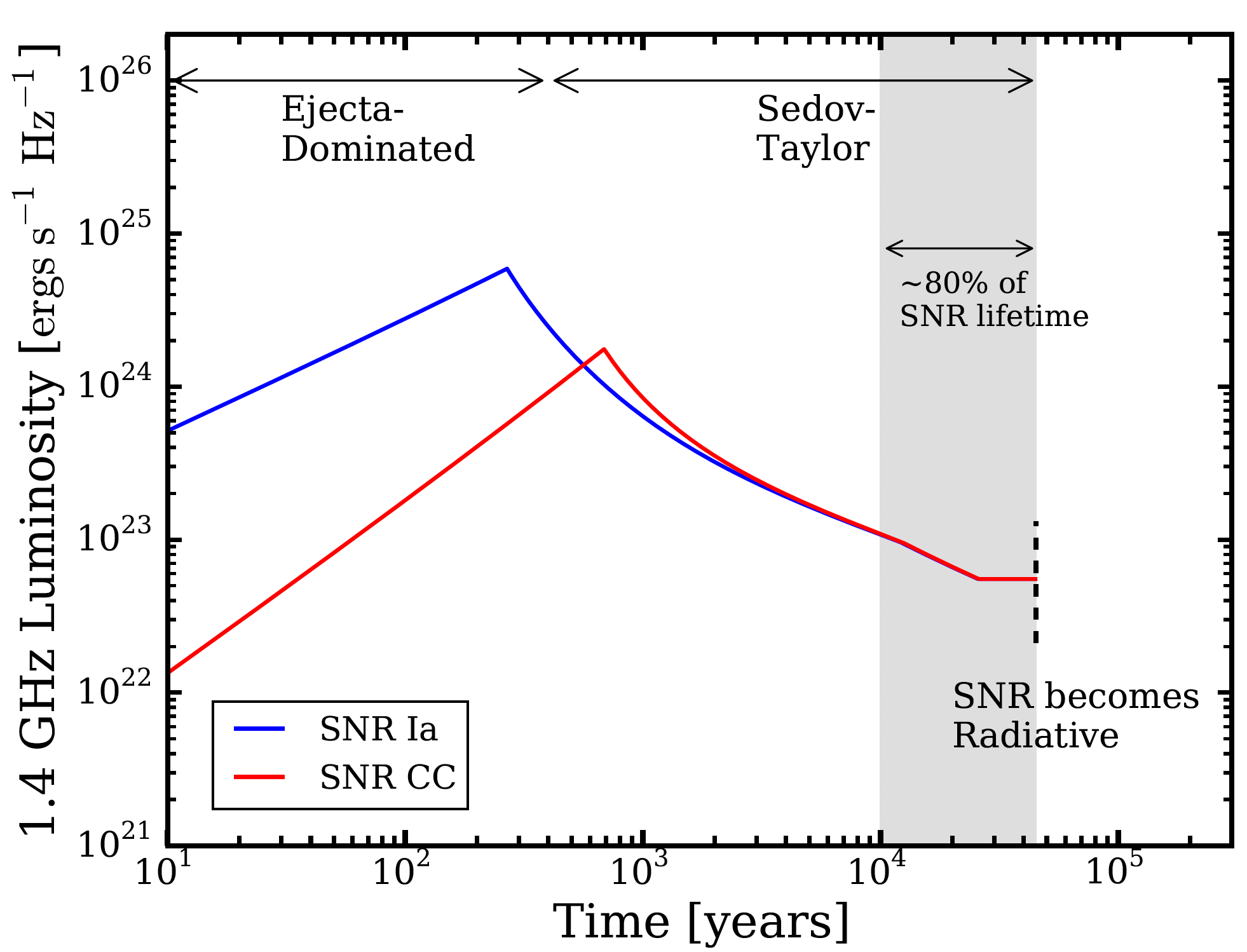 Many interesting time-variable phenomena occur in radio wavelengths, such as variable jets in AGN, scintillation, supernovae, tidal disruptions events, gamma-ray bursts, flares and many more. These are increasingly being discovered and characterized by time-domain surveys from instruments like VLA. Radio is unique as it is sensitive to dust-obscured events, and traces shock and jet interaction with the interstellar medium, providing a complementary view of high-energy phenomena to other wavelengths. I am part of the CHILES VERDES collaboration, currently the deepest radio time-domain survey, and VLASS, an ongoing all-sky radio survey above -40deg with the upgraded VLA. 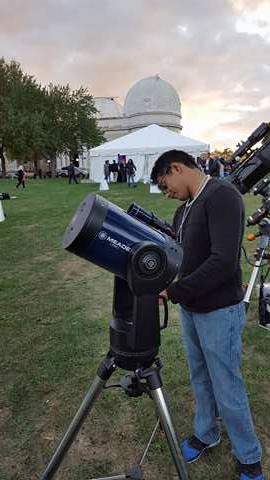 I participated in the public Astronomy Night event at Allegheny Observatory, which was a part of former-President Barack Obama's White House Frontiers Conference in Pittsburgh. The event celebrated the spirit of innovation and discovery in science, and was open to the general public. Attendees included kids from local Pittsburgh schools, amateur astronomers, and NASA officials. I was mainly in charge of an 8-inch telescope mounted on the observatory lawn, pointed at the Ring nebula. I also prepared a poster on black holes and gravitational waves, and occasionally answered questions on various astrophysical topics in the "Meet the Astronomers" tent.

Investing Now is an annual high-school outreach program at the University of Pittsburgh mainly for students from groups that were historically under-represented in science, technology, engineering and mathematics. In 2017, I was part of a team of grad students who demonstrated basic physics concepts through a series of demonstrations. I was in charge of experiments on electrostatics phenomena like attraction/repulsion, grounding, static discharge, Van-de-graff generator and the Faraday cage effect.

I started a weekly seminar with Sukhdeep Singh (Carnegie Mellon University) called Astrosnacks in 2014 where students from University of Pittsburgh and Carnegie Mellon University give research talks to a student-only audience. The goal is provide an informal setting where students can improve their scientific presentation skills through practice and feedback from their peers. Astrosnacks also features guest student speakers from other universities, review talks and various career-related lectures.